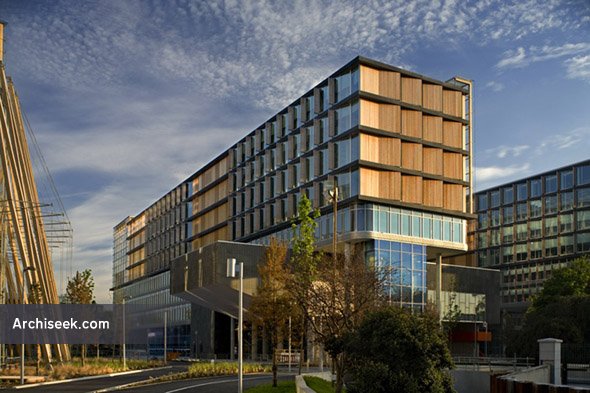 If you walk along the south wall in Dublin (or float out to sea) and look back at the city you will see how its southern skyline has changed. On Merrion Road, in a former field that sits between a golf course and the main road and sea, is a vast structure (actually six buildings sliding past each other). It’s not as if we hadn’t noticed them going up: Elm Park has been on site for almost six years now and its animated façades – rippling windows, chromatic and mirrored glass and lozenge-shaped timber stilts – have always indicated that something exciting was happening here. The hotel, clinic, three office buildings and two residential blocks (as well as community centre, cafés and pool) have been built on the former field sold by a religious order, who stipulated that senior citizen housing be provided somewhere on the site. A number of architects were asked to come up with initial schemes by the developers, Jerry O’Reilly, Bernard McNamara and David Courtney (as Radora Developments), who asked the practices to see how much they could get onto the site in a form that was acceptable to planners. Bucholz McEvoy managed the most with 100,000sq m (over 1m sq ft) and many discussions with the planners followed. While the original concept about the buildings’ form remained the same, the developers didn’t originally intend to have a mixed use scheme, says Merritt Bucholz.