Heneghan Peng design for Giants Causeway to go ahead 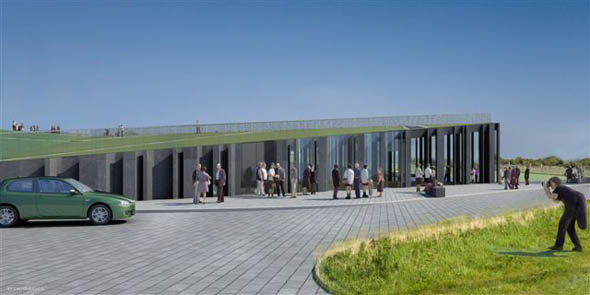 Last year the then Environment Minister Arlene Foster came under fire when she said she was “minded” to let private developer Seymour Sweeney rebuild at the World Heritage Site. That decision was reversed. If planning permission is granted, the National Trust will build a design by Dublin architects, Heneghan Peng, who won an International Design Competition in 2005.

The Trust’s Director for Northern Ireland, Hilary McGrady, said: “We said we would deliver and we have. Today we have submitted a full robust planning application befitting the Giant’s Causeway World Heritage Site and the surrounding landscape. This design brought to us by heneghan.peng.architects Dublin, was selected as the winner of the International Design Competition in 2005. The visitor facilities will have a strong environmental basis and a focus on sustainability, with no additional green field development.”

“The Trust in partnership with Moyle District Council has made enormous progress since last November. Today is a significant milestone, and we are confident and determined to deliver visitor facilities which will enhance tourism and benefit the local area and indeed everyone in Northern Ireland.”

Discussing the Trust’s announcement of investment towards the project, Hilary said; “Today I am delighted to announce that we (The National Trust) will contribute over £6 million into this project. This significant investment coupled with our ability to lever other funding sources will mean the cost to Government and the tax payer, looks set to be less than half of the £21 million previously anticipated. Key to all of this is that this investment will ensure that the Giant’s Causeway visitor facilities remain in public ownership.”

Looking ahead to the next stage of the process, Hilary said: “Today we have delivered on the first stage. Subject to planning approval by the end of 2008, funding being in place and tendering being completed, we would hope to be on-site by autumn 2009 with the new visitor centre open by spring 2011. This is a challenging target, which we hope all stakeholders will work with us to achieve.”

“This really is a significant milestone for the Giant’s Causeway, the National Trust and Moyle District Council. We are confident that this Planning Application, and the proposal we have mapped out will deliver the key objectives set out by the former Enterprise Minister, Nigel Dodds: a solution which will protect the integrity of the World Heritage Site in line with UNESCO’s requirements, provide world-class visitor facilities, will be good value to the public purse and will be timely.”