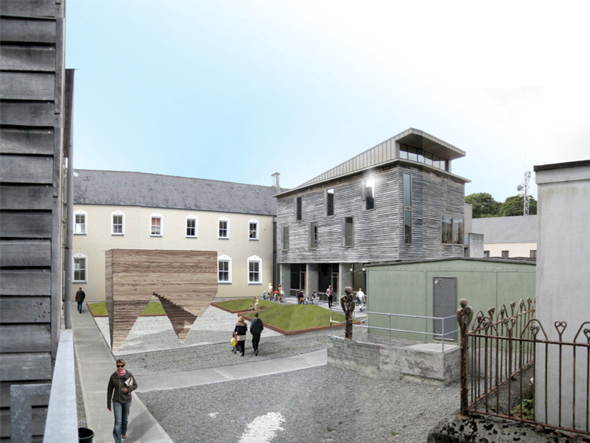 More than 400 students from more than 45 countries will assemble for a series of workshops loosely based on the theme of ‘adaptation,’ which aims to deal with the dramatic changes in Irish society over the last 20 years. 23 workshops have been selected by EASA Ireland for the assembly, ranging from built pavilions and small interventions in the locality to theoretical, abstract and media groups.

‘Lunch Box,’ is a workshop led by young Irish architects Dermot Reynolds, Ronan Costelloe and Joe McMahon. More than 20 students will join them to realise an ambitious timber pavilion and landscape proposal in the courtyard of GMIT Letterfrack. The winning proposal of EASA Ireland’s international student design competition, Anders Malmberg and Gustav Backstrom of Sweden, will lead a workshop ‘Green Room’ to build a mobile, demountable educational pavilion to educate primary school students on renewable energy and sustainable architecture. 26 students will participate in a seminar/thinktank/workshop titled ‘Flux Culture,’ that aims to deal with the issue of migration in Europe and how it effects the built environment.

Public engagement is an important aspect of the assembly, a series of lectures, exhibitions and discussions have been organised to bring together the visiting students and the greater public. EASA Ireland would like to invite you to attend it’s festival program of events in Dublin and Letterfrack detailed below, please arrive early in order to avoid disappointment. Please note that line-ups, venues, dates and times may be subject to adjustment, please visit our website www.easa008.ie for the most up-to-date information.

EASA Official Opening & Exhibition
Sun 10th August | 18:00-20:00 | St. Patricks Hall, Dublin CastleC
EASA 2008 will be officially launched on Sunday evening in the beautiful and historic surroundings of the State Apartments in Dublin Castle. There will be two separate exhibitions, shortlisted entries for the international Europan 9 Dublin & Cork Competitions and shortlisted entries for the EASA Green Room International Student Design Competition.Guest Speaker: Sean O’Laoire, President of the Royal Institute of the Architects of Ireland

Lecture: Architecture 53seven
Mon 11th August | 16:00-17:00 | UCD Astra Hall, Dublin
Architecture 53seven is a practice that, despite only being established in 2000, has already won several prestigious architecture awards and has been shortlisted and exhibited in several International competitions. Established by its principal Jason O’Shaughnessy, the focus of the practice has been on the delivery of inventive architecture, with particular interest in developing new forms of occupation that reflect the complexities of modern life. Architecture 53seven will present recent projects and completions.

Film Screening: ‘Kings’
Wed 13th August | 16:30-18:00 | AV Room, Connemara National Park
‘In the mid 1970s a group of young men left the west of Ireland, bound for London, filled with ambition for a better life in a place where they could be kings. Thirty years have passed when they meet again.’ In conjunction with our Flux Culture workshop, which aims to deal with issues of migration and its effects on the built environment, EASA Ireland will be screening this 2007 award-winning Irish film in the AV Room in Connemara National Park.

Lecture: O’Donnell + Tuomey Architects
Thurs 14th August | 19:00-21:00 | GMIT @ Letterfrack, Connemara
Leading Irish architects Sheila O’Donnell and John Tuomey, designers of the Letterfrack Furniture College, will discuss the college and present other recent projects and buildings. Their practice has been selected for more than 50 national and international awards and commendations over the past 20 years and has been shortlisted as finalists for major European awards on several occasions.

Lecture: Dominic Stevens Architect
Tues 19th August | 19:00-21:00 | GMIT @ Letterfrack, Connemara
Dominic Stevens is an internationally respected Irish architect and academic based in County Leitrim known for his studies and works on the Irish rural condition. Landscape, vernacular traditions and the rural economy all play a part in his distinctive architecture. He is well-known for his 2007 publication, ‘rural,’ discussing the Irish home in the countryside and his ‘Fluidcity,’ contribution to the Venice Biennale in 2006. He will present recent projects, buildings and areas of investigation.

Workshop Tours
Wed 20th August | 14:00-16:00 | GMIT @ Letterfrack, Connemara
Members of the public are invited to visit Letterfrack and see first-hand and discuss the student workshops in progress including a number of ambitious built projects, small interventions and several artistic and theoretical groups.

EASA Final Exhibition Opening
Sat 23rd August | 15:00-20:00 | GMIT @ Letterfrack, Connemara
The results of all the student workshops will be documented, assembled and exhibited in a final exhibition alongside the results of the EASA Student photography competition in Ellis Hall. Th exhibition will be onshow at the campus until the 1st of September.