Dublin to get new bridge over River Liffey 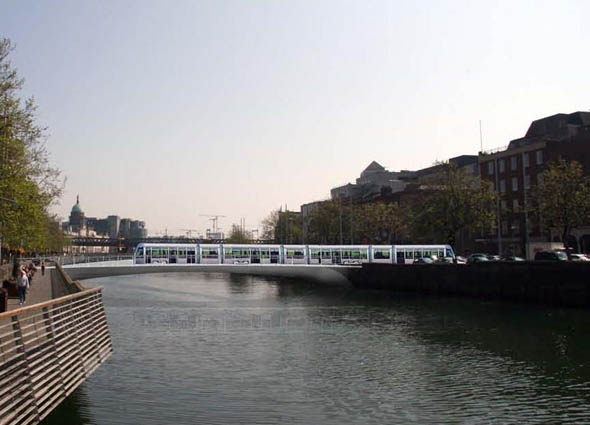 Dublin City Council has confirmed it is to build a new 15 million bridge over the River Liffey, just downstream of O’Connell Bridge. The council said the bridge, funded by the Government’s Transport 21 plan, will carry buses and Luas trams across the Liffey. “It will have cycleways and generous footpaths that will open Marlborough Street and Hawkins Street to greater footfall, prospective development and create a new north-south link from Abbey Street to Pearse Street,” the council said in a statement. It promised an “elegant, contemporary” design, with proper facilities for cyclists and wheelchairs to cross. There will also be seating and landscaping. “It will be a slender, single span, smooth concrete structure, with the underside of the bridge being designed to be as high above the water as possible so that river traffic is not impeded,” the council said. Construction is due to start late next year and will take approximately 18 months. Consulting engineers Roughan & O’Donovan and Sean Harrington Architects were appointed in May to design the bridge. Roughan O’Donovan was the engineer for the Taney Luas bridge in Dundrum, Dublin, as well as the M1 Boyne Bridge at Drogheda, amongst others.