Winning bid for U2 tower is almost €30m under highest offer 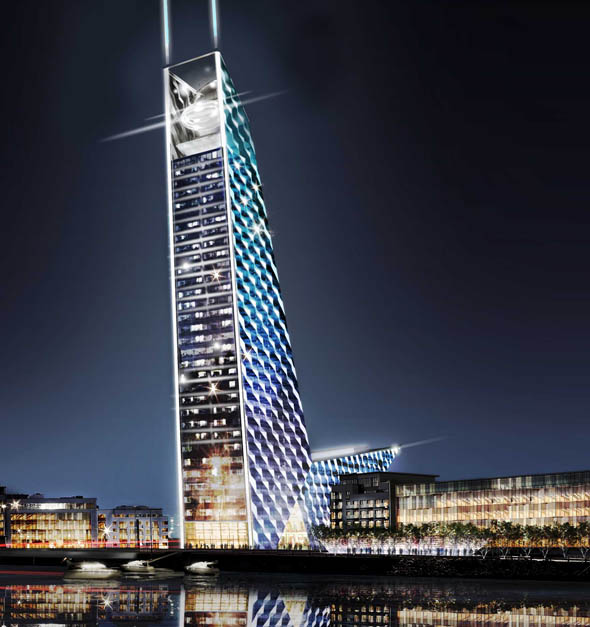 The winning consortium for the U2 tower is believed to have bid almost €30million less for the site than the highest bid submitted. The Riverside II Partnership is understood to have bid at least €100 million for the site, while Sean Dunne is understood to have bid about €75 million. The Geranger consortium which comprises Ballymore Properties, Paddy McKillen and U2 band members and management is believed to have bid a figure of slightly more than €70 million for the site. McKillen is believed to own only a small slice of Geranger, whose bid is said to have been a relatively straightforward cash offer. The Dublin Docklands Development Authority (DDDA), which ran the competition to select a developer of the tower and a new design (the third) for the building, said it could not comment on the price offered by Ballymore and its partners and how it matched up against other bids. ‘‘The tender process is ongoing,” said a spokeswoman. ‘‘This is commercially sensitive data which cannot be released at this time.” It is estimated that the U2 Tower scheme will cost over €200 million to design and build. Construction is expected to start in 2008 and be completed by 2011.The winning bid comprises a 120-metre tower with a hotel, shops and apartments designed by Foster + Partners. At the top of the tower will be a suspended egg-shaped pod which will house U2’s studios. So far, the DDDA has only released a night time render of the building. Night time images are notoriously difficult to judge a building’s quality by because, among other things, they don’t show the materials used or shadowing impacts.