New height hitch for U2 Tower 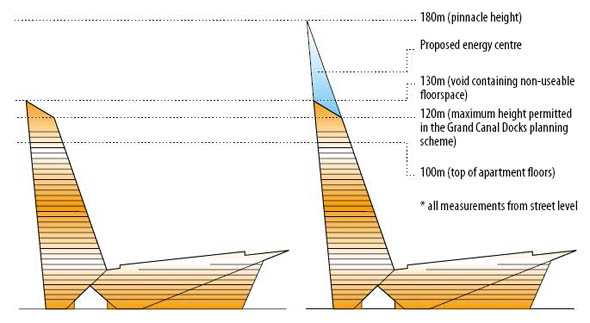 A major discrepancy between the winning scheme for the U2 Tower at Britain Quay in Dublin’s Docklands and the much taller structure intended to be built is revealed by a drawing obtained by The Irish Times. This follows a hotly contested competition involving four development consortiums for the contract to build the tower, which would include an egg-shaped studio “pod” for the U2 rock group suspended above a public observation deck. The drawing supplied by the Dublin Docklands Development Authority (DDDA) shows two versions of the west elevation of the tower designed by international architects Foster + Partners and chosen by the authority as its winning scheme last month. On the left is the scheme which was adjudicated on in the competition. It complied with the requirements of the DDDA’s brief and, in particular, the height limitations of the amended planning scheme for the Grand Canal Docks. The planning scheme specified that the main element of the U2 Tower should not exceed 100m in height to its “shoulder”, and any accommodation above this level was not to bring the overall height to more than 120m.