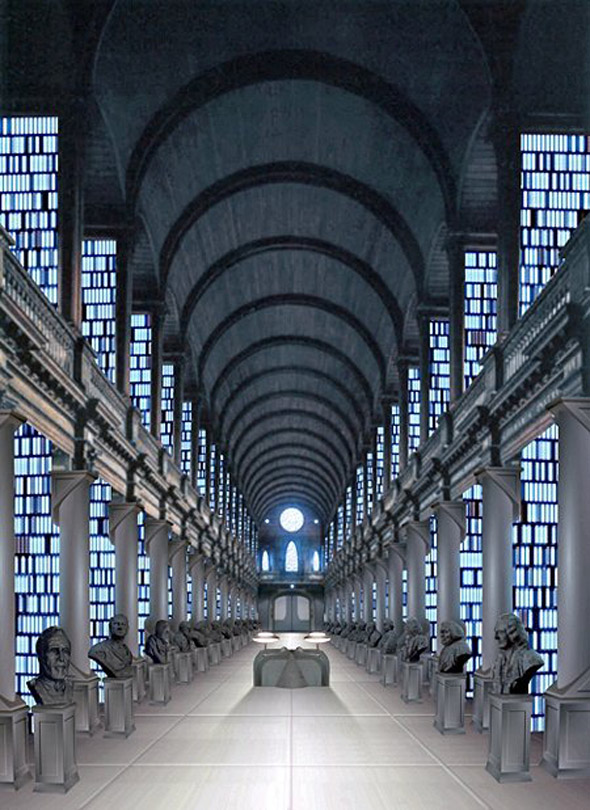 The above image is a shot of the Long Room Library, Trinity College of Dublin. Or is it? Actually it’s not, it’s an image of the Jedi Archives in the most recent episode of the Star Wars series, Episode II: Attack of the Clones.

The similarities are obvious, from the arched barrel vault running the length of the room to the double height book stacks. Even the busts and statuary of the Jedi Archive mirror the busts of figures from the academic world in the Long Room.

The similarity was first mentioned in March this year when an online cinema enthusiast site Cinescape.com produced an article on the then upcoming movie. They stated “As it turns out, the Jedi Archive/Library is an almost exact replica of one of the finest libraries in the world – The Old Library of Trinity College in Dublin, Ireland.”

The Library was designed by Thomas Burgh (1670-1730), the son of a Bishop, who joined the army like many from a landed background. He was appointed Surveyor General in 1700, and held the position until his death in 1730. His first recorded building is the enormous Royal Barracks now Collins Barracks begun in 1701. One of his other major commissions was the Custom House (1707) which was replaced by Gandon’s masterpiece in 1791. The old Custom House was a two storey building with a mansard roof and was used as a barracks for a time until it was demolished.

The old Library of Trinity College is Burgh’s masterpiece and was built between 1712-1732. A huge building, it originally towered over the university and city when it was completed. The building has undergone two major adaptations since it was constructed. Originally the Library was placed on an open ground floor arcade whose purpose was to insulate the books from damp. This was filled in during the 19th century for more shelf space. The timber barrel vaulted ceiling ie not original either, being added by celebrated architects Deane & Woodward in 1858-60. Originally the library had a high flat ceiling.

Is it too much of a coincidence that designers at Lucas Films would produce a library with not only a similar book arrangement to the Long Room, but a similar roof? A roof that was not original but added by later generations to solve a specific problem? The original flat ceiling was causing the external walls to buckle, and the insertion of the barrel vault was the preferred option to reintroduce structural integrity to the building. Additional supports were added which run from the floor to the ceiling along the edge of the bookstacks. Each library bay became structural and is vaulted at right angles to the main vault.

Trinity don’t think so. After an article in the University Record (the college newspaper), the college authorities have instructed their legal advisors to look into the case. According to a recent report in the Sunday Independent, spokespeople for George Lucas have stated that “It is totally untrue that there is any connection between the scene in Attack of the Clones and Trinity College.” We’ll wait and see. Lucas Films declined to comment.