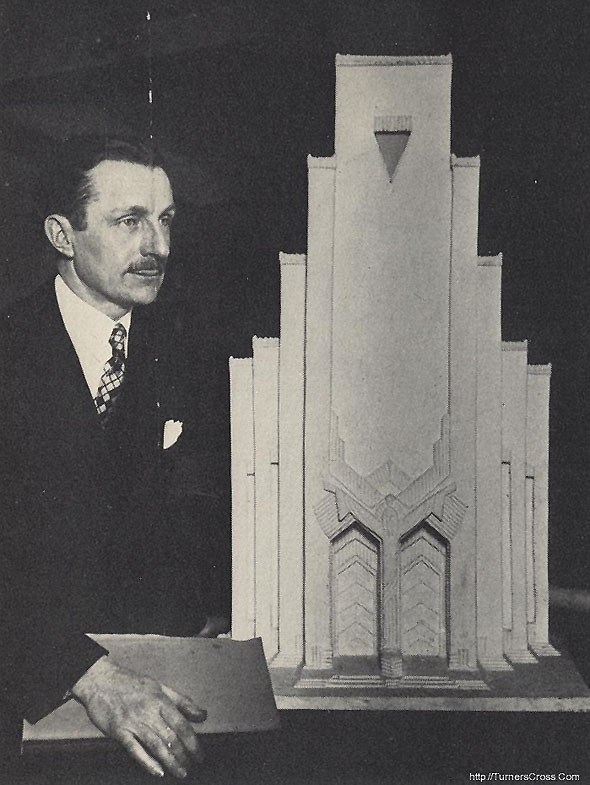 An old wrong has been put right by RKD McCarthy Lynch’s brilliant restoration of Barry Byrne’s masterpiece, Christ the King, in Turner’s Cross, Cork. The parish’s website, turnerscross.com – as good a site about a single building and its architect one could find – is a stylish apology to the sullied memory of the church’s Chicagoan creator and his collaborators.

Byrne (1883-1967), a protégé and friend of Frank Lloyd Wright, never set foot inside what he regarded as his best building, although he commissioned and collected photographs of the church in the 1930s, 1940s and 1950s. He did not feel welcome in Cork.

After his death, his widow, the artist Annette Cremin Byrne – who had designed Christ the King’s sanctuary lamp, stations of the cross and stained glass windows – paid a private visit to Turner’s Cross. Sean Rothery, whose Ireland and the New Architecture: 1900-1940, published in 1991, was instrumental in rehabilitating Byrne’s reputation in Ireland, says she was furious to discover that the sanctuary lamp was gone and its whereabouts unknown.

Byrne did not attend the dedication ceremony in October 1931 – probably because, like many American architects, he had been forced out of business following the Wall Street Crash of 1929. Nor was he publicly acknowledged by his client, Rev Daniel Cohalan, Bishop of Cork, although JR Boyd Barrett, Byrne’s local supervising architect was.

In time the misleading impression seems to have got around that Boyd Barrett had actually designed the church. In the hungry 1930s local architects did not like to see work going to foreigners. In the introverted Ireland of the Free State, the building was considered controversial. Rothery says: “Church leaders gave Christ the King a cool reception and there was hostility from establishment figures within the architectural profession. John O’Gorman was one of the few who praised it.”

A decade on, as Byrne struggled to get back on his feet, he sought a letter of reference from his old client in Cork. The bishop wrote: “The architect did not profess to follow any of the existing styles of architecture. . . The church is appreciated and liked by the congregation. But in a country where there is not much modernism in architecture, closeness to the old forms of architecture would be preferred. Old styles could be modified to secure the undoubted advantages of the new.”

At a time when Conradh na Gaeilge was lobbying 2RN, the precursor of Radio Éireann, to broadcast more Irish and less jazz music and thousands of Blueshirts were marching against the introduction of “jazz dancing” into Ireland, Barry Byrne’s sin was to have designed Ireland’s only jazz-age church. To the conservative mind, jazz equaled decadence.

It was the rapid growth of the South Parish in the new suburb of Turner’s Cross that necessitated the erection of a second church – a chapel of ease – within the parish. Cohalan obtained estimates for the building of a church along traditional lines; the cost was thought prohibitive. The budget was set at £30,000; Christ the King cost 10% less than that.

It was as a result of reading an article – probably, as Rothery suggests, by Lewis Mumford in Commonweal, a Catholic weekly review of literature, the arts and public affairs – that Cohalan’s attention was directed to Byrne, an architect who, as Mumford put it, had “reconciled tradition and innovation” while producing economical church designs.

What is hard to believe is that Cohalan did not know what he was getting into when he commissioned Byrne, who was already a major force in reshaping 20th-century Catholic church architecture and giving built expression to radical liturgical views. There are unconfirmed reports that the bishop even saw some of his earlier work in America.

Byrne’s St Thomas the Apostle, built in 1924 and considered by the US national register of historic places to be the “first modern Catholic church building”, was described by the Archbishop of Chicago as “too advanced for the Catholic Church.” The nave was transformed into a broad, almost square form, without internal columns – as at Turner’s Cross – which unified the feeling of the interior space by integrating the nave and the sanctuary. The sanctuary was thrust into – rather than separated from – the nave, anticipating the liturgical reforms of Vatican II by 40 years.

Byrne sent the first drawings for the new church to Cork on May 16, 1927. “The conditions we established to determine the plan were these,” he wrote: seating accommodation; dominance of the high altar; closeness of the high altar to the congregation; acoustics; relative economy of construction.” Elliptical in form, it was a church unlike anything in Europe at the time.

Early in 1928 Cohalan cabled Byrne, proposing Boyd Barrett as supervising architect “and to advise on a suitable site”. Economies were introduced: cast concrete walls instead of brick, a plaster ceiling instead of wood. The site was changed from Capwell to the Evergreen Road. Byrne wrote to Cohalan in May 1928, saying: “I have never worked on a church or other building I have enjoyed so much. The plan and design are simple and strong. The interior design is so arranged that all of the lines will appear to lead to the altar. I am very pleased with it.”

The problem appears to have lain in what came next. “Function is at the beginning of design,” Boyd Barrett told the Cork Examiner on October 26, 1931, the day after the church was consecrated (in the same week that the Shannon scheme at Ardnacrusha became commercially operational and the IRA was declared illegal). “Imagination finds its place in sensing the value of those functions for artistic disposition and effect,” he continued. “In a Catholic church, then, what are the functions?” The answer must have sounded revolutionary: “The liturgy of the mass is not for the few, it is for all to follow, as intimately as they can. . . The modern church is for the people who build it and of the day that produces it,” said Boyd Barrett.

Byrne’s work had taken a radical new direction after he toured Europe in 1926. He was friendly with Eric Mendelsohn – whom he had met at Wright’s towards the end of 1924 – and through him met Hans Poelzig and other leading expressionist architects. Commentators have remarked on Christ the King’s passing resemblance to PV Jensen-Klint’s much larger, proto-expressionist Grundtvig Church, then under construction in Copenhagen.

Thanks to its red-tiled roof and adobe appearance, Byrne’s church is more like a pumped-up Californian mission chapel, however, with art deco highlights – in particular, the entrance with its stepped, zigzag motifs and decorative, stylised Christ, designed by John Storrs, a Chicago-born sculptor living in France. The figure was executed by a local sculptor, John Maguire, from Storrs’s plaster casts. The entrance is a clever manipulation of the chevron Byrne often used to form a peak over an entrance door. Here, the peaks blend into the sleeves and arms of the statue in a manner that makes the sculpture part of the entrance as opposed to being just a feature.

The interior is probably Ireland’s finest art deco space – a calm, black terrazzo basin, dominated by exaggerated lines of perspective and an ivory terrazzo altar and reredos screen with yellow and gold highlights, unlike anything previously attempted in Ireland.

Mendelsohn described his visit to Wright (when he first met Byrne): “He says that yellow is the colour of creation, of the earthy, of life, of death; gold is the highest life and blessedness after it.” The influence of Wright, with whom Byrne worked from 1902 until 1908, is also evident in the plaster design model of the church, in the suppressed level of natural lighting, in the recessed electrical lights (a novelty in Ireland) and in the cast concrete walls, invented when Byrne worked on Wright’s Unity Temple.

But mostly it is the style – the effect – that you notice. Not only is the structural expression of the church – its concrete walls and steel roof trusses – suppressed, it is subverted. The monolithic walls are finished to look like adobe and the steel roof trusses run across the church, surprisingly, at right angles to the serrated perspective generated by the ceiling. Did Cohalan detect a triumph of style over substance?

Although Byrne lived long enough to see the substance of his ideas adopted worldwide, his influence never recovered from the lost years of the great depression and the war that followed it.

Turner’s Cross, he wrote, “has, through these troubled days seemed the bright and redeeming spot in a very murky world and when the pressure of our necessities has been great, it offered an escape into an activity that lifted us out of our troubles.”