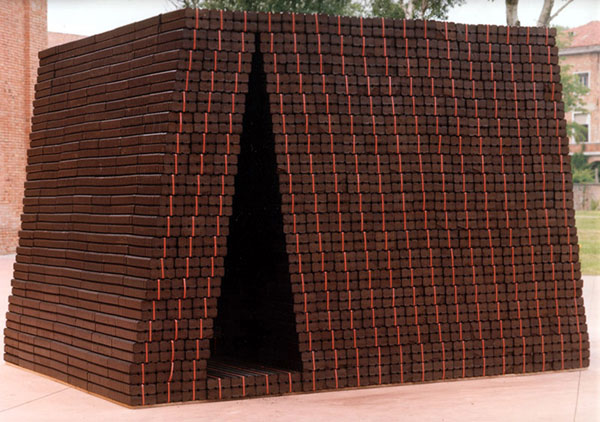 Irish architecture has always struggled to be heard on the international stage. Yet ever since Scott Tallon Walker won the RIBA Gold Medal in 1975, each generation has thrown up at least one outstanding talent. The architecture of de Blacam and Meagher has restored the art of building. O’Donnell and Tuomey have an endless capacity for giving fresh meaning to architectural form. Now the precocious, white-hot talent of Dublin architect Tom de Paor is showing a new way forward, one that harnesses to great effect many of the techniques of contemporary art.

It is turning out to be quite a summer for de Paor. The first phase of his master plan for the A13 arterial corridor in east London opened in May. In June, he flew the flag for Ireland after being invited to design the republic’s first representation at the Venice Architecture Biennale. And right now he is putting the finishing touches to a scheme to re-order a stretch of the seafront at Clontarf in Dublin.

He has just won an international art competition for the Dunkettle roundabout on the north bank of Cork’s Jack Lynch tunnel. He is adding a porch to Eden, the lofty restaurant he designed in Temple Bar’s Meeting House Square, is discussing the details of a project for Dublin Corporation in Smithfield and building a new studio for himself off Dublin’s North Circular Road.

Not bad for a 33-year-old stripling in a profession whose members are still considered young at the age of 40. A London architectural journal, in a profile last month, called him “young and gifted”. Ruan Magan’s forthcoming television documentary on his project for the Venice Biennale will bring him to the attention of a wider audience at home. But word is already seeping out: de Paor is “white hot”, according to this month’s Image magazine.

From the outset, de Paor wasted no time in making his name. Within months of graduating from University College Dublin (UCD) in 1991, he had – in partnership with Emma O’Neill – won a national architectural competition for the design of the new visitor centre at the former Royal Gunpowder Mills in Ballincollig, County Cork. The pair set up office in a caravan on site and lived there for a year, directing the construction.

The awards for the finished building were not long in coming. Its innovative, Scandinavian-influenced brickwork was a revelation to Irish architects. Brick had suddenly come alive again, through the use of thick joints, never before seen in Ireland, and fresh bonding patterns. Peter Cook, the English doyen of architectural talent spotters, immediately pronounced that “another generation of Irish architects, with quite a different sensibility [to that of Group 91] might be waiting in the wings.”

Instead de Paor took off in another direction, to associate with artists at the National Sculpture Factory in Cork, where he became, uniquely, architect-in-residence. He honed his skills on a succession of small projects, all of which were well received by the critics in the annual architectural awards schemes.

Then, in 1996, he won a competition to be appointed lead consultant on one of Britain’s largest public art projects to date, the £9 million A13 Artscape scheme between Barking and Dagenham in east London. The first artwork, Holding Pattern, a floating field of intense blue light suspended above a forest of stainless steel columns, was completed in May.

Last March de Paor was invited by the Department of Foreign Affairs to represent Ireland at the Venice International Biennale of Architecture. The challenge was daunting, even if the project would be small. The Biennale was opening in June. No site had yet been found for the Irish pavilion. There was no brief and only a tiny budget, IR£15,000. But it was a big break, one that nobody in Ireland had ever had before. It was a chance to take the stage at the architectural world’s equivalent of the Oscars.

The Venice Biennale, ephemeral and festive, is the most gilded, spectacular and influential architectural exhibition in the world. Aldo Rossi once declared: “In the [Venice] film festivals, we have always loved the big production and the film of the directors making their début, the famous actors and the debutantes; all of them became part of the History of Cinema.”

The Biennale has become part of the history of architecture. The first, in 1980, gave us the Strada Novissima, “the vitality of the new eclecticism”, asserting the will of architects to regain confidence with both the historical heritage and the living body of the city. This year’s Biennale, the seventh, under the direction of Massimiliano Fuksas, seeks to revive “the ethical pressure of modernity, with its utopian force.” The theme is “Ethics, Not Aesthetics”. It seems as if the whole world of architecture is there, from the winners of the Golden Lions – Soleri, Utzon, Piano, Nouvel and Campo Baeza – to Zaha Hadid, the diva of deconstruction, and our own bright debutante.

De Paor says his first thoughts turned to using turf briquettes. As a student, he and his friends had played an outsize version of Jenga, the stacking game, using briquettes. His motivation now was to “kill it, to ‘do’ peat briquettes so well that nobody could ever think of doing anything else with them, ever again.” Josef Beuys’s Irish Energy – the famous turf sandwich shown at Rosc 77 in Dublin – was a reference point. He set to, attempting to generate the project in a way that is quite un-Irish. He describes it as being “more like a Swiss way of working: here is a material; now what can you do with it?”

That carried him a certain distance, but the final result is not at all Swiss: NÂ³ is a small, chambered pavilion, using 1,741 stacked and corbelled bales of turf briquettes donated by Bord na Móna, its dimensions set by the capacity of one lorry, 21 tonnes. Following trials in the UCD building lab, the “house of cards” was built in Venice in six days by UCD’s Tony Cullen and de Paor’s project architect, Stephen Shortt. Stability comes from concealed rebar, threaded through 15mm plywood fins, and fibreglass tape.

The pavilion is miniscule, as tight as a drum: two squeezed passages through which visitors must slither – sideways – and a central sky-roofed chamber no bigger than a confessional. Is it a room or a tomb? De Paor knows his history and can quote Adolf Loos, who wrote in 1910 that “only a very small part of architecture belongs to art: the tomb and the monument. Everything else that fulfills a function is to be excluded from the domain of art.”

NÂ³ may look like a big chocolate but, close up, it smells – a burnt, sickly sweet scent that is hard to pin down. It is decaying, slowly shedding little bits of its mass. Suggestive of a rick of turf or a bothy, caving and passage graves, it also owes something to Rachael Whiteread’s sense of scale, Carl Andre’s stacking and James Turrell’s reverence for the sky. Few projects have felt as dense since O’Donnell and Tuomey’s 1990 Irish pavilion at Leeuwarden, The Netherlands, which was subsequently re-erected for the opening of the Irish Museum of Modern Art.

NÂ³ is an allegorical construction that supports a wide range of “readings”. It brings to mind aspects of two famous unbuilt Italian projects – Rossi’s 1962 monument to the Resistance at Cuneo, a raised hollow cube, open to the sky; and the tight, spiralling passageways of Giuseppe Tarragni’s 1938 Danteum. In 1989, de Paor spent a year in Milan and “saw everything by Rossi and Terragni.”

Multiple readings are facilitated by de Paor’s discussion-based method of work, which is particularly Irish in the way that it makes use of language – word plays and double meanings. “We are great story tellers,” he says. “We are good at narrative.” There are many narrative ideas embedded in the pavilion, all related in a long and fantastical tale spun around the legend of Nicholas, the saint beloved of Venetians (who claim that the remains of “Santa Claus” lie in the church of San Nicolà² de Lido).

The tale – too long to tell here – is summarised on nine small, double-sided cards that visitors can collect in the central chamber: it is probably this content that turns a work of art into a pavilion. De Paor calls the pavilion an inhabited north point – “Santa’s grotto” – that takes the form of the letter N when viewed from above.

Fusing the story of Santa Claus with the frenzied property market that is the Celtic Tiger, de Paor has come up with a fitting finale for the pavilion. When the Biennale ends, there will be a simple gesture that will resonate across the generation dividing his Ireland from that of Beuys’s Irish Energy. The 21 tonnes of Ireland’s landmass that is the pavilion will be soaked, decompressed and donated to a public garden in smaller, land-starved Venice. The turf, formed about 3,000 years ago, will be the oldest ground in Venice.

De Paor had initially hoped to build his pavilion on a barge and float it into the canal that bisects the Biennale site, the Giardini, but there were too many uncertainties about bureaucracy and local regulations. Had it come off, it would have been a sensation, recalling Rossi’s floating theatre, Il Teatro del Mondo, which made a spectacular impression at the first architecture Biennale in 1980.

The Irish pavilion has created its own impact, despite its location remote from the Giardini. The Architectural Review calls it “modest yet meticulously constructed, one of the most memorable pavilions” and Doris Saatchi says it is “a witty and charming offering of earth to a city in need – hard to find, but worth the search.”

Raymund Ryan, the Irish commissioner for the Biennale, says, “If Irish architecture is to grow up and expand its horizons – if it is to become part of the critical discussion – it is very important to come to Venice, to be regarded as having something to say.”

It seems we are on the way.