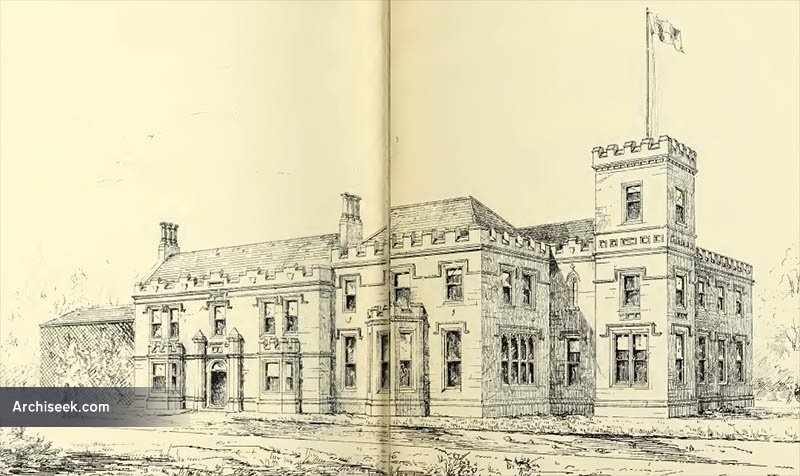 During the Second World War, the grounds were used as a training area for Belgian troops.

“This week we give an illustration of Ballycraigy Manor, near Antrim, the residence of James Chaine, Esq., J.P., which is at present undergoing extensive alterations and enlargements. The front of the old structure, now forming the left wing of the new building, and which was originally of Italian design of the plainest character, is being recast, as shown in the view. The right wing, which is entirely new, covers an area of about thirty-six squares, and provides the following accommodation :— A principal staircase, 30 ft. by 27 ft., with wine cellars underneath ; dining-room, 30 ft. by 24 ft., with serving-room, 13 ft. by 13 ft., adjoining; billiard-room, 30 ft. by 20 ft.; smoking-room, 19 ft. by 16 ft. ; fire-proof plate closet in tower, and three large bedrooms on ground floor, and on first floor seven large bed-rooms, &c. The style of the building is Castellated Tudor, and the materials used in the building are local. The contract for the works has been taken by Messrs. Thomas Dixon and Co., builders ; and the architect is Mr. W. Redfern Kelly, C.E., Belfast.” The Irish Builder.