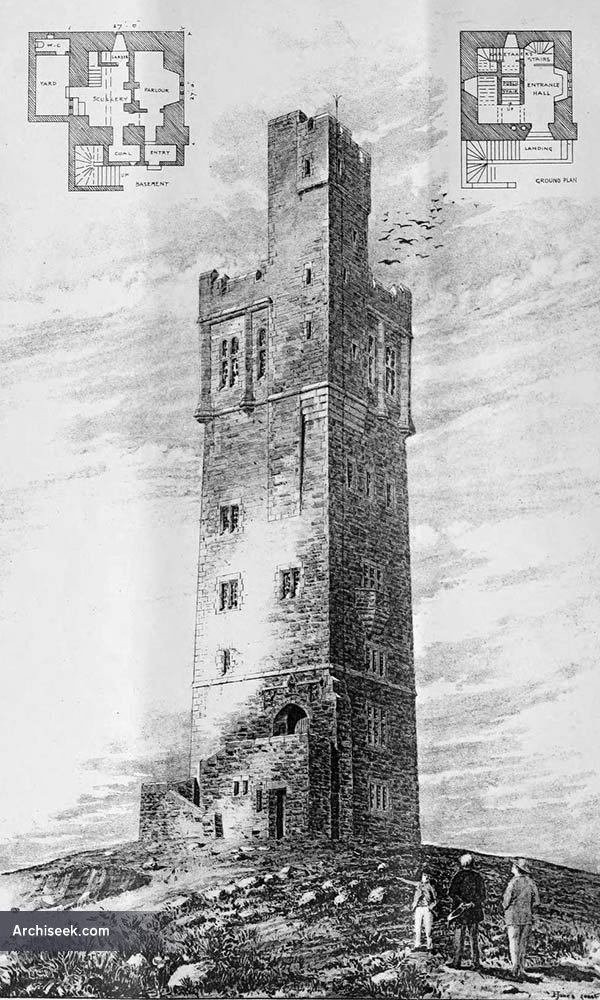 “On Saturday last, the 25th inst., the foundation-stone of this building was laid by Mr. J. Frecheville Ramsden, son of Sir J.W. Ramsden, Bart., Lord of the Manor. The tower is being built as a memorial of the Queen’s Jubilee. The site on Castle Hill is at once commanding and historical ; it is two miles out of the town, and forms a prominent feature in the landscape, within a radius of twenty or thirty miles. In the County Histories mention is made of a castle erected on the hill in the reign of King Stephen, from which it derives its name, and tradition claims for it even more remote interest, as having been the site of a Roman fortress. Whatever of truth there might be in the tradition, nothing has been found to verify it ; but the accuracy of the History is vouched for by the remains of the castle walls having been found, whilst excavating for the foundations, at a depth of 5ft. At one angle of the site first decided upon the workmen came upon a sinking in the rock 5ft. square, and commenced clearing it; but after digging to a depth of 15ft., and the bottom not having then been reached, further labour on it was abandoned. In consequence of this discovery the site was altered, and the well (if such it be) is now inclosed by the walls of the tower. Nothing of interest was found amongst the debris, but the old masonry, which is receiving the attention of archaeologists, will be properly protected and exposed, the ground landlord. Sir John W. Ramsden, Bart., who gave the site, taking a great interest in the matter. The foundations are carried down to the rock, which is UU’t. below the surface. The tower will be 20ft. square at the base and 100ft. high from the ground to the turret flat, which will be 1,000ft. above the sea level, the total height from the ground being 106ft. It will be massively built in a local stone (Crossland Hill). The cost will be about £2,800. The contractors are Messrs. Ben Graham and Sons, Huddersfield. The quantities were supplied by Messrs. Abbey and Hanson, of Huddersfield. The architect is Mr. Isaac Jones, of 0, Deerbrook-road, Heme Hill, London, whose design was chosen in competition. The accompanying view was prepared by the architect for the proprietors of the Huddersfield Chronicle, who have lent it to us through the co-operation of Mr. Jones.” Published in The Building News, July 1 1898.