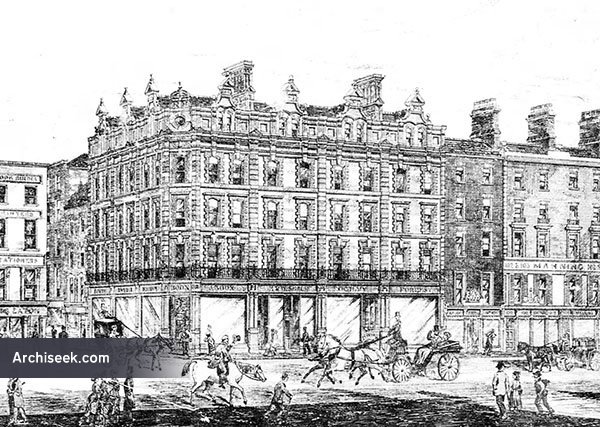 Fine commercial block at the corner of Grafton and Wicklow Streets. At one point, almost the entire block to Suffolk Street was the work of Mitchell – in addition to this building, he had rebuilt Nos. 100, and 105-106 in the same red brick. Weir’s the jewellers moved to No. 96 in 1905. Nos. 97-99 were demolished in the mid 1930s to be replaced with the Maskora Turkish Baths by George L. O’Connor – a facade with Art Deco features – now bookended by Mitchell’s design.

“Our present illustration represents two blocks of new shops which are about to be built in Grafton-street for the occupying tenants, on the sites at present covered by Nos. 96, 97, 98, 99, 100, 105, and 106. The new buildings are designed by Mr. William M. Mitchell, architect, 10 Leinster-street, and will be faced with red brick and relieved by dressings and string-courses of moulded red brick and limestone. The shops will be fitted with plate-glass windows and coiling shutters.

The contractors for the larger block are Messrs. M. Meade and Son, and for the smaller one Messrs. Collen Brothers. The demolition of the old houses has already begun, and it is expected that the new shops will be ready for occupation by the new year. These houses form part of the valuable property which recently reverted to the Corporation on the expiration of the old leases.”