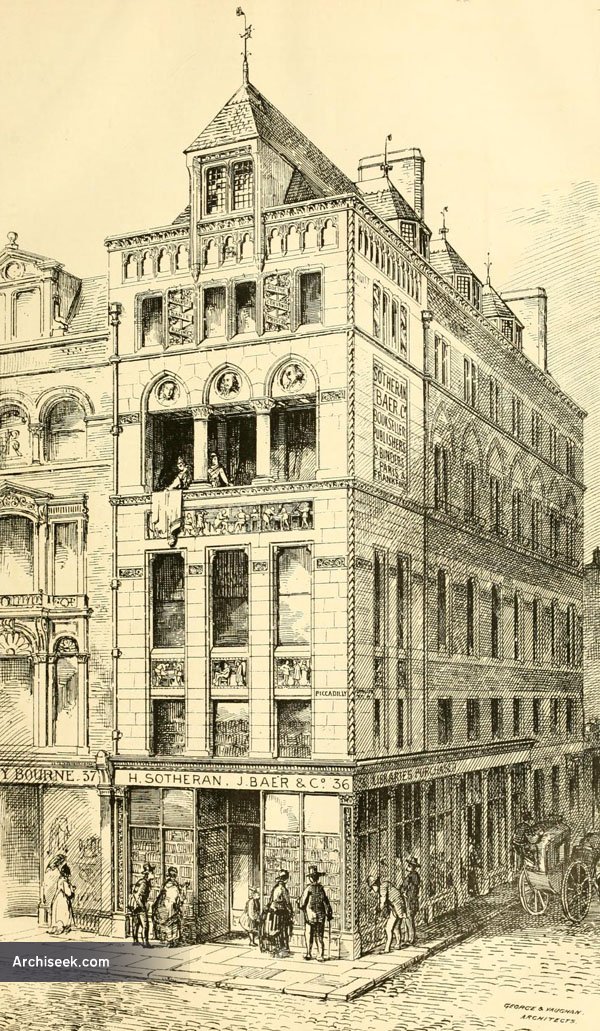 Published in The Building News, July 19 1872: “IN our review of the International Exhibition we noticed as follows the high character of design and draughtsmanship reached by Messrs. Ernest George and Vaughan, in their admirable pen-and-ink sketch of No. 36, Piccadilly : ” This building reminds one a little of a Venetian palace by its solid dignified massing, its use of surface ornament, and its open loggia with large round shafts, and capitals of a Venetian type ; but the main features are more French and Flemish than Italian; the whole is of good Gothic, well put together, and the architects unquestionably understand what they are about.” We this week give an illustration of the building, which has been erected by Messrs. Sotheran, Baer, & Co. It has a narrow frontage in Piccadilly, and a frontage of 100ft. in Swallow-street. Internally, height is given to the shop by a gallery or balcony in the place of the usual mezzanine floor, and by the windows to this gallery good light and ventilation is given to the shop An oak staircase leads up to the gallery, and goes on to the second floor, which latter forms a show-room for second-hand books. The three floors above provide suites of rooms for residence or offices, and are approached from a separate entrance by a stone staircase with wrought-iron ballusters.

The elevation is of Portland stone, and in the treatment the architects have abstained from the heavy cornices and projections that so frequently obstruct the light and harbour the soot in our London streets. The general broad effect of light is pleasingly broken by the shadow under the loggia, which provides a balcony where no projection over the street would have been suffered, at the same time lessening the noise of the street traffic. Within the arches of the loggia are carved life-size busts of Shakespeare, Newton, and Michael Angelo, as representing Literature, Science, and Art. But the chief feature of the design is the introduction of colour in the elevations. The parallels consist of pictures in Powell’s mosaic glass (apeus scctit), giving the history of literature. This series consists of
1. Egyptians inscribing hieroglyphics on a sarcophagus.
2. King Alfred being presented bj- his mother with a manuscript.
3. Monks copying manuscripts.
4. The dream of Guttenberg.
5. Caxton reading the first proof of the Canterbury Tales.


The long panel under the loggia is divided into three pictures, representing etching, lithography, and wood engraving. The figures are about 2ft. high, but the subjects being limited to two or three tints have sufficient breadth to tell their story from the street. These cartoons were drawn by Mr. Henry Burrow, and there is a pleasing character and formality about the figures that commends itself as architectural decoration. A stone dormer-window of the Nuremberg type rises out of the Piccadilly front, and in Swallow-street the attics are lighted by dormers of wood, the roofs being kept level with the ridge of the main roof.

There n a quaint picturesqueness about the building, which is not, however, allowed to interfere with its practical utility, and we congratulate Messrs. George & Vaughan on their work. The cost of the building is about £8,000, and ha-s been carried out by Messrs. Hollands & Hannen, Mr. Ville acting as foreman.