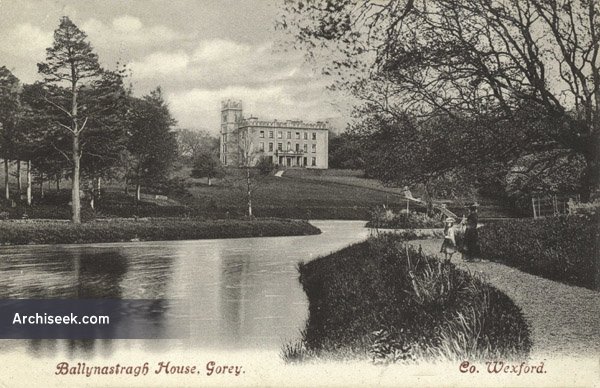 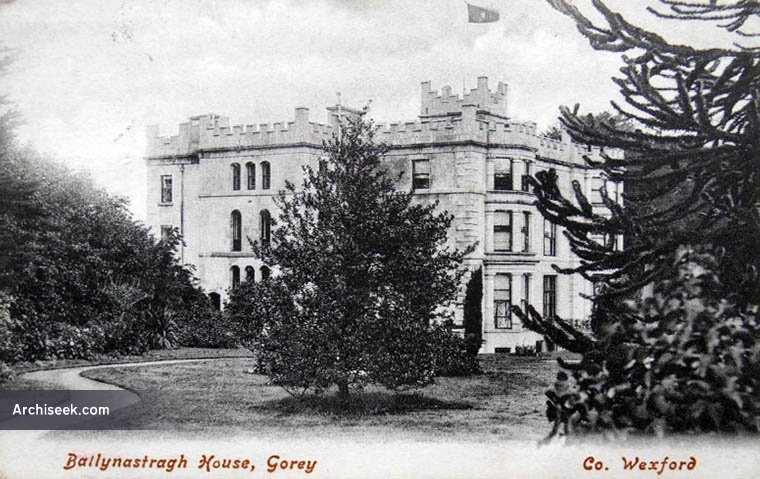 Largely remodeled by G.C. Ashlin in the late 1860s for local MP Sir John Esmonde, and destroyed in an arson attack in March 1923 when it belonged to his son Sir Thomas Esmonde, a Senator of the new Irish Free State. The original house was a large Georgian house to which Ashlin added unconvincing battlements and a tower to one end. After the fire, in which it was almost completely destroyed, Fuller & Jermyn drew up designs for a rebuild, it was eventually rebuilt after much dispute over compensation by Dermot St.John Gogarty in 1937 in a Neo-Georgian style.

The Irish Times, 12th March 1923, reported: “Ballynastragh, the beautiful residence of Senator Sir Thomas Henry Grattan Esmonde, Bart., about three miles from Gorey, County Wexford, was set on fire on Friday night, and burned to the ground… The only occupants of the house at the time of the outrage were Colonel Laurence Esmonde, his brother, together with five servants. The raiders, of whom there were about 50 in all, forced an entrance through one of the lower windows at about 9.30 pm, and gave the occupants ten minutes to get ready. They were kept under armed guard in an out-building till the house was well alight, the rooms and furniture having been sprayed with petrol. With the permission of the man in charge, Colonel Esmonde removed the golden chalice and sets of vestments from the beautiful little chapel in the upper portion of the building before the raiders had commenced their work of destruction. These articles are all that was saved. With the aid of a fairly strong wind, gas bombs being also used, the flames made great headway, huge tongues of fire rising towards the sky. They were seen at least ten miles away. The garrison of National troops at Gorey, attracted by the fire, arrived shortly after 11 o’clock, about half an hour after the raiders had left, but they were too late to save the building. Only the bare walls of it remain”.

“Some interesting particulars concerning the burning of his house were given yesterday afternoon to a representative of the Press Association by Sir Thomas Grattan Esmonde, who for the past few days has been in residence in London, but returns to Dublin today. “I received a wire yesterday,” he said, “that my house had been burned down, and I must say that it came as a surprise to me. The only reason for such an act, so far as I know, is that I am a Senator of the Irish Free State, and, of course, I am in no worse a position than anybody else”.