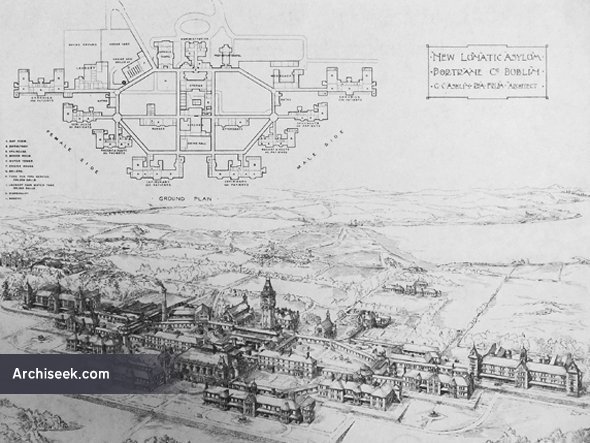 Reputed to be the most expensive capital project ever undertaken by the British Government in Ireland, Portrane Lunatic Asylum had a massively complex plan. This was due to the desire to separate different categories of the insane – chronic, melancholic or suicidal, acute, and the infirm. It was designed to accommodate 1,200 patients. Now known as St Ita’s Hospital.

The design for St. Ita’s was the subject of a limited architectural competition which was won by George Ashlin. Although his design was very advanced in its concept at that time, his scheme was sanctioned by the Board of Control and accepted by the Board of Governors of the Richmond Lunatic Asylum in 1895. The ‘Irish Builder’ in its issue of April 15, 1895, records an argument which subsequently erupted within the Royal Institute of the Architects of Ireland, regarding the choice of the winning scheme. Ashlin’s design had exceeded the proposed building budget and he had been allowed to revise his scheme to reduce the cost. Other architects including Thomas Drew, Albert E. Murray and W. Kaye Parry were amongst those registering their displeasure at the change of rules.

Construction of the building commenced in 1896 and was largely complete in 1900, with some ongoing work until around 1905. Many smaller buildings have been added throughout the 20th century but the original building of 1896-1900 are still intact and functioning in part. Illustration published in The Building News, 1900.