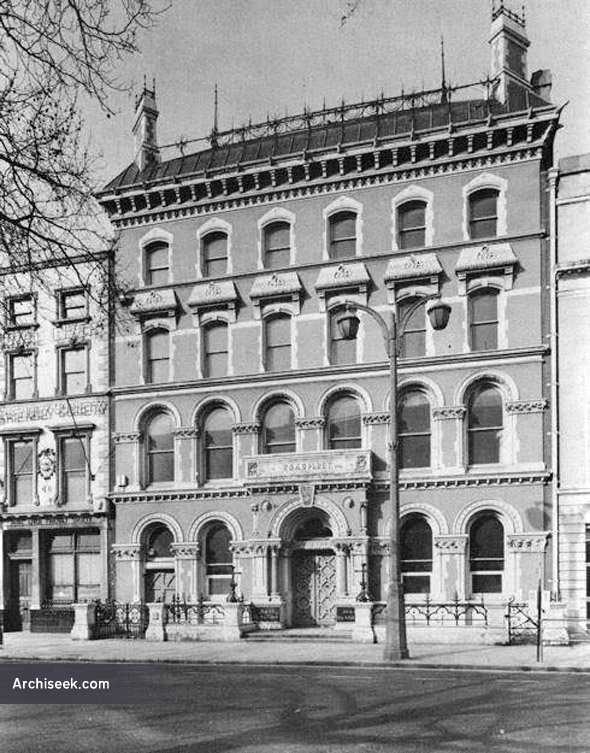 Demolished in 1972, this fine Victorian facade was the head offices of Gilbey’s. Originally a pair of older house, it was extensively remodelled in the 1860s by William G. Murray. A large bonded warehouse was also constructed to the rear at this time.

“The existing vaults, which are under both houses, Nos. 46 and 47, and extend for some 200 feet to the rere, having proved insufficient and unsuited for certain branches of their trade, the Messrs. Gilbey have removed the whole of the outlying buildings at the rere of their premises, and are proceeding to erect a large wareroom of wood, iron, and glass, 137 feet long by 57 feet wide. The roof will be in three spans, the centre span being 28 feet wide, and the roof rising above the two side roofs, and the light and ventilation procured fi-om a clear story running the whole length of the building. The roof is carried on arched principals, supported by slender iron columns with ornamental caps, and will thus, when completed, with the addition of a little moderate and judicious decoration, present the appearance, on a miniature scale.of an ” Industrial Exhibition “building, if we may be allowed the term. In this wareroom it is intended to carry on all the operations connected with the trade, such as washing, bottling, packing, Ac; and it will also contain, enclosed by screens, the clerks’ offices, and a large sample-room, boiler-house, &c. The front presented to Sackville-st. will extend to the full width of the two existing houses, and will be four storeys in height, as at present, each story, with the exception of the lower one, being a continuous arcade of six windows, divided from each other by richly carved string courses. The dressings to the windows consist, for the most part, of angle shafts with carved caps and bases, and deeply moulded and carved arch mouldings. The general face of the building will be in while face brick. Two bays of the lower story are devoted to a large and imposing entrance porch, a semicircular archway springing from columns of polish-d Aberdeen granite, and with angle columns of blue limestone. This leads to a large vestibule, or hall, laid with encaustic tiles, from which are approached the wareroom and offices, and the staircase leading to the large suites of offices on the upper floors. The front is surmounted by a deep corbelled cornice, and a kind of Mansard roof, the lower portion of which is lead, and the whole is covered with a wrought iron ridge cresting. The angles of the building will be carried up above the neighbouring houses by lofty chimneys disposed in a somewhat novel manner, anglewise to the building, and crested with wrought iron also. The whole front promises to be of an imposing and dignified character, and will be at least a step towards the palatial buildings which we hope to live long enough to see flanking each side of our noble street, at the upper end.” The Dublin Builder, August 1 1864