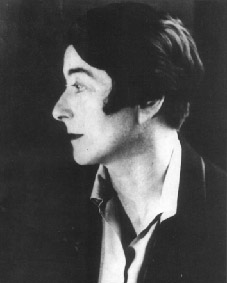 Born on 9th August 1878, at the family home in Brownswood, Enniscorthy, Ireland, she spent her childhood in London and was among the first women to be admitted to the Slade School of Art where she took up painting before undergoing an apprenticeship in a laquer workshop.

She moved to 21 Rue Bonaparte, Paris in 1902. She meets Seizo Sugawara, the Japanese lacquer master who teaches her his art, and she quickly established herself as one of the leading designers of laquered screens and decorative panels. In 1917, the first article in English, about her work appears in Vogue magazine.

During the ’20s and ’30s she became one of the leading exponents of the revolutionary new theories of design and worked closely with many of the outstanding figures of the modern movement, including Le Corbusier. In 1924 a special edition of the Dutch newspaper Wendingen features Gray’s work with texts by Jean Badovici and Jan Wils. After several formative journeys with Badovici, Eileen Gray decides to build her first architectural work E-1027 which was finished in 1929. Her other important house was Tempa a Pailla, at Castellar (built 1932-34).

After the war and up to her death, she continued to work as a designer, on both major projects like the cultural and social centre which occupied her from 1946-1949, and on a number of smaller furniture designs. In 1970 after having been more or less forgotten, Eileen Gray is ‘rediscovered’ by the American collector Robert Walker thanks to her lacquer creations. In 1972 she was appointed a Royal Designer to Industry by the Royal Society of Art, London. Since 1978 the Mueum of Modern Art in New York has in their permanent collection the E1027 adjustable table. Eileen Gray died on 31st October 1976 and is buried in the Père Lachaise cemetery in Paris.