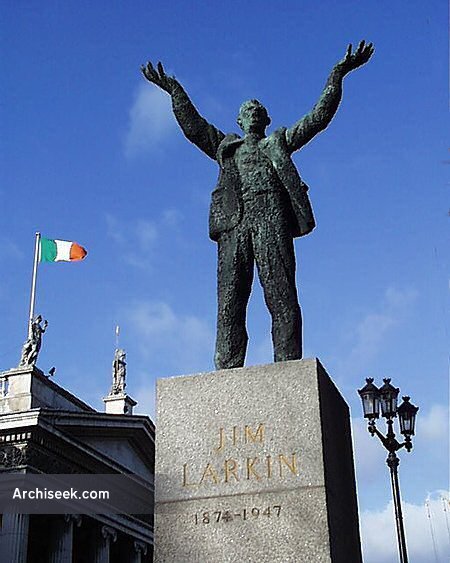 Facing Clery’s, Jim Larkin (1874-1947) is remembered on Dublin’s main thoroughfare for his dedication to worker’s rights. In 1909 Jim Larkin founded the Irish Transport & General Worker’s Union catering for unskilled workers such as carters, dockers, labourers, and factory hands, who lived in conditions of great misery in the slums of Dublin, then probably among the worst in Europe. By 1913 his union had over 10,000 members and had its headquarters in Liberty Hall.

His success caused apprehension among the employers, who, led by William Martin Murphy, banded into a federation and insisted that all employees leave “Larkin’s union”. When they refused, the great lock-out of 1913 followed. Other unions supported their fellow-workers, and about 100,000 were thrown out of employment. Despite being reduced to starvation they kept up the struggle for eight months.

In 1912, along with James Connolly, he founded the Irish Labour Party of which he was the first leader. Jim’s life was a continual struggle for the betterment of all workers both through the Unions and through his service on Dublin Corporation and in Dail Eireann as a TD.

The statue was criticised at the time of its erection for the outsized hands encouraging the workers to rise up.