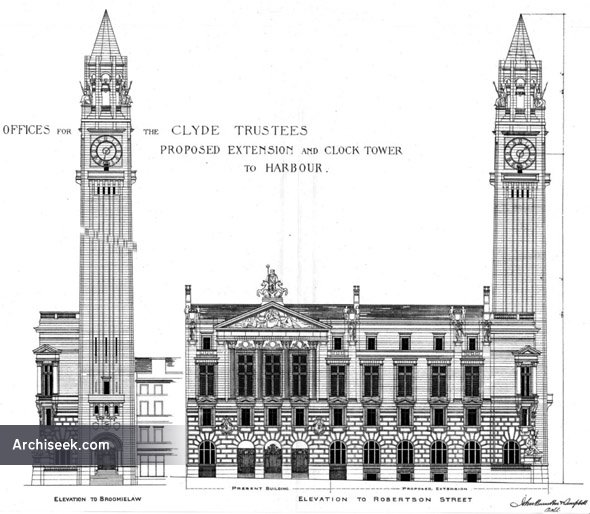 Offices of The Clyde Trustees Proposed Extension & Clock Tower to Harbour. Elevations to Broomielaw & Robertson Street published in The Architect, January 20th 1888. The most spectacular historical landmark along Broomielaw is the domed Clyde Navigation Trust Building (now The Clydeport Building). The Trust, established by Act of Parliament in 1858, brought city fathers, shipbuilders, merchants and industrialists together to develop and manage the river and its trade. The Trust Building was designed by Glasgow architect J.J. Burnet (1882-86, extended 1905-8) in an Italianate Baroque style.

Facade decoration by local sculptor John Mossman shows Father Clyde Enthroned and figures of seagods Poseidon and Triton. Classical figures of Demeter Leading a Bull and Amphitrite with Seahorses and, below, statues of Thomas Telford, James Watt and Henry Bell, are by Albert Hodge (1908). The interior is equally impressive