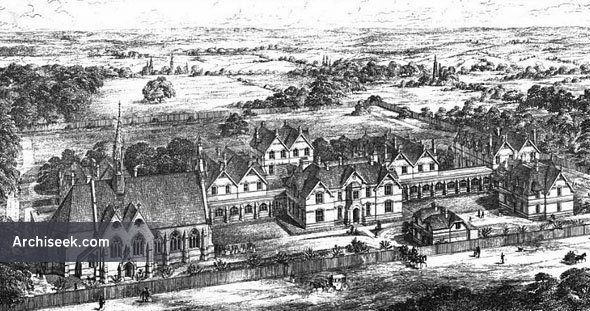 From The Architect and Contract Reporter, November 27 1869: The Magdalen Hospital is the oldest institution of its kind, was founded in 1758, and has hitherto been located, in the Blackfriars Road. For many years the removal of the institution from the Blackfriars Road has been mooted, but the Governors shrank from so serious and expensive an undertaking until concurrent circumstances should seem to render it imperative.

In 1863 Her Majesty’s Charity Commissioners made a careful inquiry into the working of the Institution, which resulted in a recommendation that the Governors should take early steps to remove the same to a healthy suburban situation, and then dispose of the old buildings and site. Six acres of land were bought in the Leigham Court Road (West), at Streatham, and the present Hospital has been erected thereon.

The building is designed to accommodate 140 penitents, with a Central Administrative Department, a detached Infirmary, Chaplain’s House, Chapel, &c, and the whole
complete, with the exception of the easternmost block.

In arranging the plan the idea has been to separate and classify the inmates as much as possible, giving to each ward of fifteen its distinct occupation in all domestic duties, such as cooking, washing, etc. This multiplication of kitchen and laundry arrangements has necessarily added to the cost, but the system was considered to be so advantageous that the Governors have not hesitated to carry it into effect.

Each block therefore forms practically a home for fifteen inmates, the whole being connected together by a corridor, which also communicates with the Administration Department, the Chaplain’s house, and the Chapel. A large garden in the rear with a southern aspect gives the means of obtaining air, exercise, and recreation.
and the total cost has been about 28,000, including a considerabl6 amount of earthwork. Mr. Josiah Allen acted as Clerk of the Works The old site in the Blackfriars Road has recently been sold to the Trustees of the Peabody Fund.