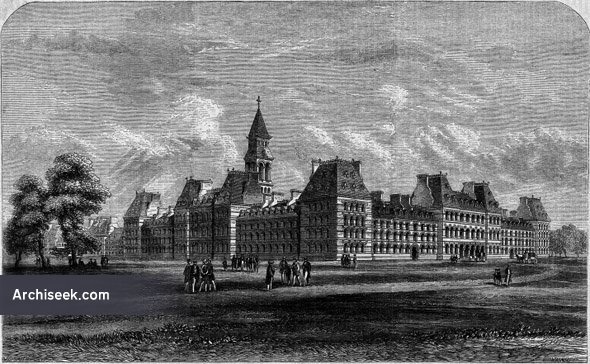 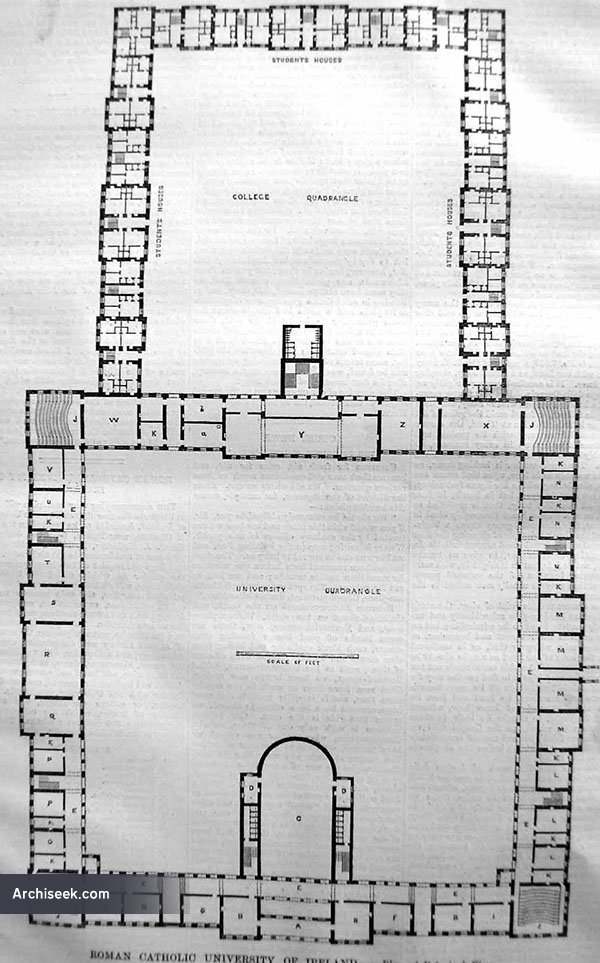 A proposal for a Roman Catholic University of Ireland in Clonliffe. First published in the Dublin Builder, 1 April 1863. Plan published in The Builder, August 20 1864.

Described in The Dublin Builder in April 1863: “The buildings comprise two distinct but united blocks, the front quadrangle being 450 feet square, and devoted to university, and the rere to collegiate purposes,—a distinction requiring explanation, viz. : surrounding the former are the apartments comprising temporary church, lecture theatres, apparatus rooms, (lining-hall, the aula maxima, offices and residences for the administration of the university, reception rooms, libraries, &c., whereas the latter is designed exclusively for students’ dwellings, the accommodation (provided for about 300) varying according to class and to suit circumstances. Hereafter a great dining-hall, with requisite culinary offices adjoining, and a cliurch, 180 feet by 80 feet, will form additional wings at west and east sides respectively. The principal facade is designed in a novel and effective style of architecture, and shows five great masses of building, the centre being 130 ft. wide by 125 feet high to apex of roofs—which throughout are surmounted by a rich, perforated, metal ornament—and the wings about 48 feet in width ; the intermediate spaces completing tlie 450 feet above noted, for that side of the quadrangle along the full length of which this facade extends. Immediately behind the centre building a great campanile and clock tower, containing the chief staircase of stone, will rise to a height of 253 ft. 6 in., which, when completed, will he by far the highest structure in this city, and will be seen to additional advantage in the naturally elevated position of Drumcondra hill.

A pedestal, 10 feet in height, is continued from end to end of facade, and tier over tier of arched headed openings, with columnared shafts and moulded archivolts, rise above it, the centre and wings being surmounted by great pavilion roofs, with attic storeys therein. In the spandrels over windows medallions to contain busts ot Irish saints, kc, are introduced. A corballed cornice of bold and peculiar character is continued at the eaves on principal facade. The effect of these grand features will, doubtless, he very imposing in execution, as it is now in the drawings. The interior is approached by three separate entrances, viz., a central one—under a great outer piazza, communicating with a hall and vestibule, which lead to a spacious corridor — also two others midway between the wings.

On the flanks the style of architecture of front is partially followed, but much less elaborately. Granite is the material intended to be employed in the walling throughout, and the finer portions, dressings, &c., are to be of Portland stone. The University grounds will embrace thirty-four acres, and the front of the building itself will face the Bishop’s road, with one flank towards Drunicondra-road. The works will be commenced in a few weeks.”