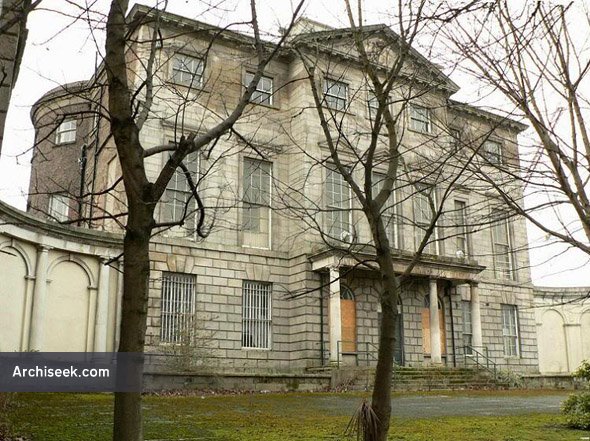 Built by Edward Augustus Stratford (1736-1801), 2nd Earl of Aldborough as Dublin’s last great house of the eighteenth century. The foundation was laid down in 1792 and after its completion there is no record in my possession that any of the family made it their permanent residence, and, although it bears the date 1796, evidence shows that it was still not fully completed by 1798. It included a Play House, a cold bath and a music roo and on the Earl of Aldborough’s death, the property became owned by his wife.

It is built of brick, and cut granite forms the facade, and when built, had balustrading all the way around the parapets, with urns and eagles, sphinxes and lions, and a Coat of Arms, displayed bearing Stratford, Herbert, Henniker, North, Neale, and Major.

It was uninhabited from 1802 to 1813, when Prof Von Feinagle leased it and opened it as a school. he built an addition to the house including large classrooms and a Chapel. He died in 1820 and by 1830 it had been closed altogether as a school. At the outbreak of the Crimean War when it was used as Barracks on acquisition of the Government, and then used as the Stores Department of the Post Office. It is now empty.