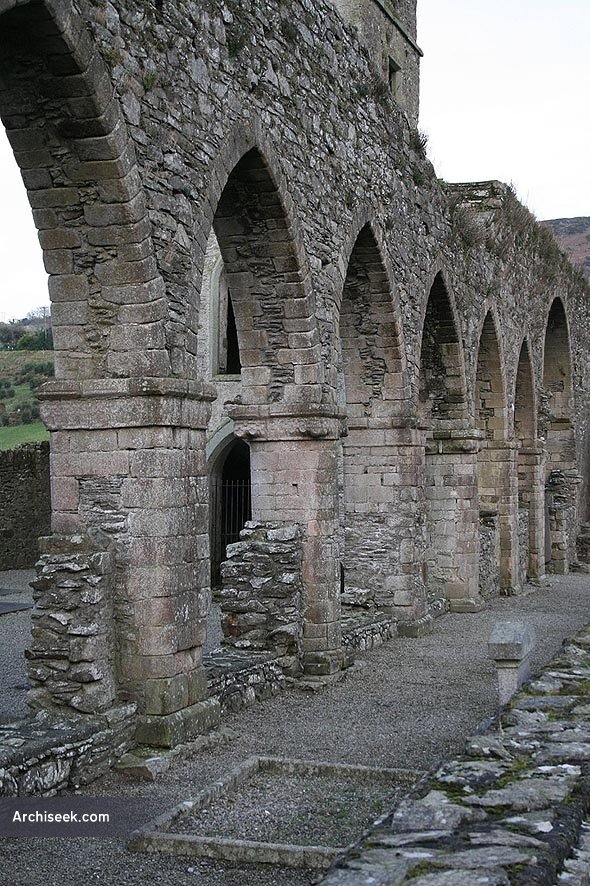 Baltinglass Abbey is one of the most important Cistercian abbeys of Leinster. and was founded in 1148 by Dermot McMurrough, king of Leinster. It was the second house to be colonised from Mellifont. The construction of the permanent buildings had begun only a few years after the initial foundation and the church was raised relatively quickly. The buildings date to the middle of the twelfth century, and are typical of the Irish versions of the Cistercian style.

One of the abbots built himself a “˜tower house’ or castle in the late middle ages, and in 1541 it was reported that Baltinglass owned castles at Graungeforth, Knocwyre, Mochegraunge, Graungerosnalvan, Grangecon, Littlegraunge amongst others. In the early sixteenth century the annual income of the abbey was estimated at £76 (£126 in peacetime) making it one of the richest Cistercian abbeys in Ireland at that time. The Dissolution came quickly to Baltinglass: it was one of only five Irish Cistercian monasteries suppressed in the first round of closures, 1536-7.

Although none of the conventual buildings survive, the abbey church remains relatively unscathed. The church is now considered one of the finest examples of Romanesque architecture in Ireland. The church contains a rich array of carvings, including some with animals and human figures. The north-east crossing pier is decorated with a lion and foliage ornaments, while a bronze crucifix in the Romanesque style also survives. The nave of the church is aisled with alternating cylindrical and square piers, which are of English origin, the bases of which are decorated with a range of unusual designs. These were crafted by the so-called “˜Baltinglass Master’ who subsequently worked on the abbey at Jerpoint. A series of tiles have also been discovered at the site; one design depicts a warrior thrusting forward with a circular shield. Other features of interest are the bases of two Romanesque doorways in the nave aisle and the well-preserved sedilia in the presbytery.