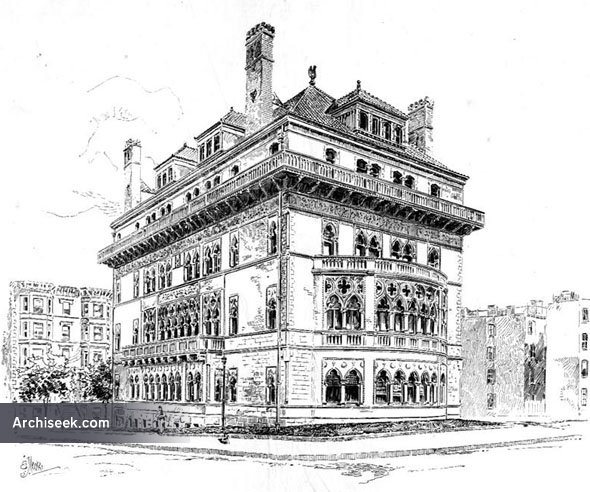 The Montauk Club is a private social club located at 25 Eighth Avenue in Brooklyn, and was founded in 1889 and has remained a private club since its founding. The magnificent Club House was designed by the famed New York architect Francis H. Kimball, who was inspired by a palace on Venice’s Grand Canal. The Club House was completed in 1891 and its Venetian gothic architecture, carved mahogany woodwork and beautiful stained glass windows remain its signature features. Its inspiration was the Ca d’Oro on Venice’s Grand Canal; the Quatrefoil (four-lobed) windows and pointed arches of the Club are taken directly from the Ca d’Oro.

Kimball was an early user of terra cotta ornamentation, the molded clay material that was just becoming fashionable. It is visible throughout the Club’s exterior, forming the surrounds of the windows and enclosing the columns on the balconies. The Indian faces that compose the capitals of the columns are of terra cotta, as are the Club’s two friezes: One, running around three sides of the building depicts scenes of the Montauk Indians; the other, above the main doorway on Eighth Avenue, shows the laying of the building’s cornerstone.

The subtle coloration of the structure, from dark brown to tawny yellow, reflects the restricted range of materials used: brownstone, yellow-orange brick, ivory and amber terra cotta, red Spanish tiles for the roof. The Montauk Club received landmark status from the City of New York in 1974.