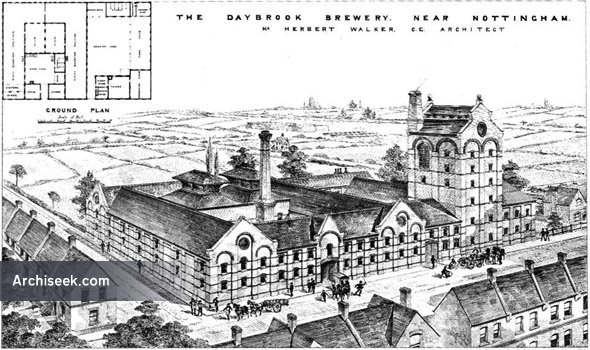 “The brewery of which we give an illustration this week is now being built for John Robinson, Esq., at Day brook, a suburb of Nottingham, from the designs of Mr. Herbert Walker, C.E., of Basford, Nottingham. The building, contracted for by Messrs. Bains and Turton, of Basford, is now approaching completion. The building is designed to contain a thirty-quarter plant, and is arranged on the “tower” principle, so that there is no pumping of wort. The cold-liquor back of cast-iron is in the roof, and the liquor is heated in a cast-iron boiling- back fitted with copper coil. The mash-tun is of cast iron, and fitted with Southby’s patent automatic mashing machine, and with Couron’s patent rakes and copper sparger. The malt is raised to the upper floor by a double cone sack-tackle worked by steam where it is passed through the mill, from whence the grist shoots into a hopper immediately over the mash tun. The wort from the mash tun runs into a steam- jacketed wort copper, fitted with copper fountains, &c. The hop-back, which is of cast-iron, is underneath the copper, from whence the wort runs over one of Pontyfex and Wood’s patent refrigerators to the fermenting rounds, which are of English oak, and placed in a separate building. There rounds are fitted with revolving skimmers and attempcrators. Beneath the fermenting tuns are the settling banks, from which the beer will be finally racked into casks. There are splendid rack cellars on the same level as the racking-room floor. The beer will be lifted from the cellar to the waggons by a cask-hoist, worked by steam-power. A horizontal steam- engine placed in the basement drives the whole of the machinery. A well, yielding a splendid supply of water, has been sunk in the brewery, and the liquor is lifted from thence to the liquor- back in the roof by a set of three-throw pumps 5in. diameter. The building has been designed so as to enable the brewery to be worked with the minimum amount of labour, and although everything throughout is of a most substantial character, no money has been expended in unnecessary decorations. The buildings in the rear consist of washing and cask shed, stables, coopers’ shop, &c. To make the premises more complete, there are capacious maltings attached consisting of two sixty -quarter sets.”