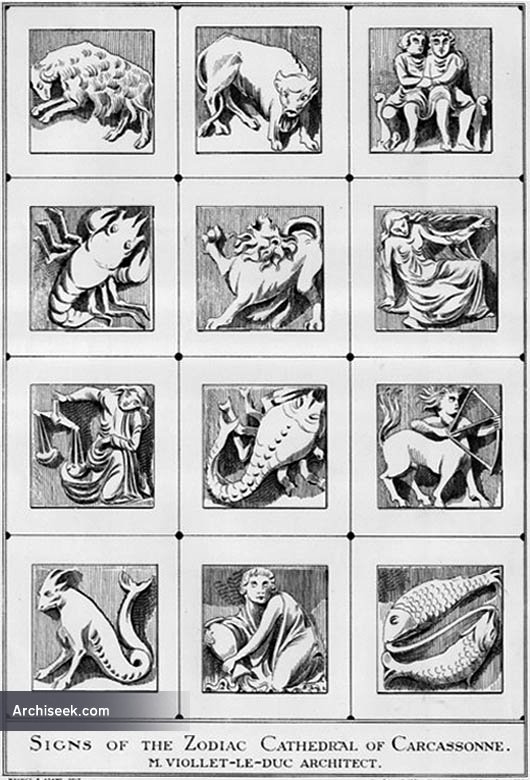 Carcassonne was struck from the roster of official fortifications under Napoleon and the Restoration, and the fortified cité of Carcassonne fell into such disrepair that the French government decided that it should be demolished. A decree to that effect that was made official in 1849 caused an uproar. The antiquary and mayor of Carcassonne, Jean-Pierre Cros-Mayrevieille, and the writer Prosper Mérimée, the first inspector of ancient monuments, led a campaign to preserve the fortress as a historical monument. Later in the year the architect Eugène Viollet-le-Duc, already at work restoring the Basilica of Saint-Nazaire, was commissioned to renovate the place.

In 1853, works began with the west and southwest walling, followed by the towers of the porte Narbonnaise and the principal entrance to the cité. The fortifications were consolidated here and there but the chief attention was paid to restoring the roofing of the towers and the ramparts, where Viollet-le-Duc ordered the destruction of structures that had encroached against the walls, some of them of considerable age. Viollet-le-Duc left copious notes and drawings at his death in 1879, when his pupil Paul Boeswillwald, and later the architect Nodet continued the rehabilitation of Carcassonne.

The restoration was strongly criticized during Viollet-le-Duc’s lifetime. Fresh from work in the north of France, he made the error of using slates and restoring the roofs as pointed cones, where local practice was traditionally of tile roofing and low slopes, in a snow-free environment. Yet, overall, Viollet-le-Duc’s achievement at Carcassonne is agreed to be a work of genius, though not of strictest authenticity.

The Cathedral was built in the thirteenth-century as a parish church, dedicated to Saint Michael. Following war damage in the fourteenth century it was subsequently rebuilt as a fortified church. In 1803 St Michael’s was elevated to cathedral status, replacing the pre-Revolutionary cathedral dedicated to Saints Nazarius and Celsus.