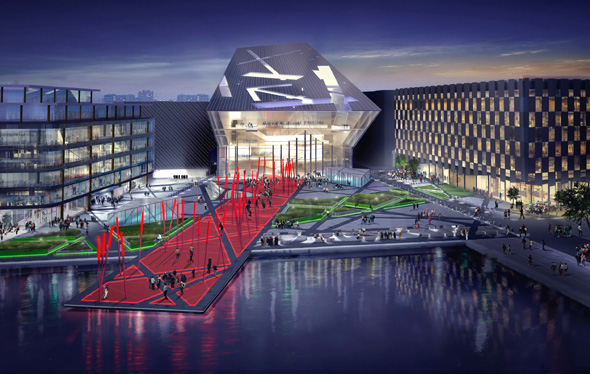 The revised master plan for Grand Canal Square in Docklands, with a diamond-like 2,000-seat theatre as its centrepiece, will provide “an architectural expression of the vitality of Dublin”, according to its designer, perky international “starchitect” Daniel Libeskind. He was speaking yesterdayTUES at a glitzy launch of the scheme in the great hall of the Royal College of Physicians in Ireland, which was transformed for the occasion by bordello lighting, a backing track of nightclub music and big screens showing off the architecture. Hosted Chartered Land, developer Joe O’Reilly’s latest vehicle, the launch was attended by members of the city’s business community, who were being targeted to lease space in two of the three office blocks that will form elements of the overall master plan. Last July 2007, solicitors BCM Hanby Wallace announced plans to relocate to one of these office blocks, which will have a floor area of 13,935 sq metres (150,000 sq. ft). The other two blocks, totalling 21,367 sq metres (230,000 sq ft), are still available.