The New Museum, which is to be located at the first desert plateau outside Cairo, between the great Pyramids of Giza and Cairo, is described as the largest museum of Egyptian artefacts in the world and one of the largest museums in the world. The Museum is envisaged as a cultural complex of activities devoted to Egyptology and will include a conference facility, library and multimedia facilities.

Intended to be the first museum in history conceived as an integral component of the information Highway, the first global virtual museum, it is envisaged that a system of display will be developed allowing for the display of artefacts physically in the museum as well as virtually hosting Egyptian artefacts from collections all over the world. 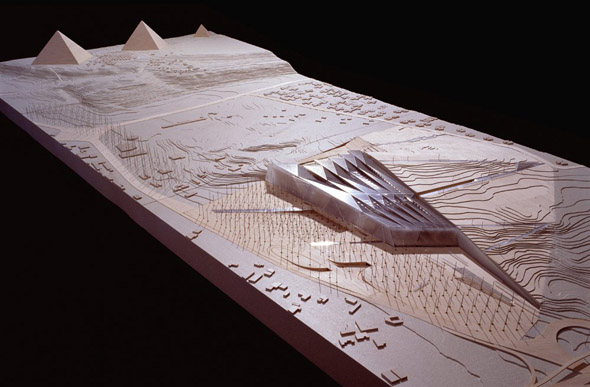 On our first visit to the site, we were awe-struck by the almost indescribable strength, presence and sheer power of the Pyramids, seen from our taxi on the Ring Road approach from Cairo. Having spent most of that day understanding the site, we left that evening, from the upper plateau, the Pyramids and their Light Show to our side and lights of Cairo before us against a brightly lit night sky. We felt on our journey back, that it was between these two conditions, the modernity of Cairo and the Antiquity of the Pyramids, in time and space, that the Grand Egyptian Museum was to be made.

A new edge to the timeless face of this desert plateau is formed by the New Museum, a thin veil of translucent stone structured by fractal geometry. As seen from Cairo, this newly inscribed surface of translucent stone constructs a dynamic identity; yet from within the museum, this surface traces a new visual trajectory towards the Pyramids.

The new museum occupies a void within a 3-dimensional frame inscribed by a set of visual axes from the site to the three Pyramids. In plan, the lines that structure the museum are traced along these same visual lines. In section, the museum is structured along the ascent from the entrance and its’ parks to the Plateau level.

Paradoxically, the success of technological integration is its eventual disappearance-invisibility. In order to mesh technology into the new museum, technology must be transformed into an architectural element, in this case into digital streams. The walls that define the digital streams become the primary infrastructural element in the galleries supporting the interactive vitrines and special display requirements

The Grand Egyptian Museum is not a singular museum in the traditional sense of the museum; it is constructed as a complex of different activities, which contribute to a cultural environment that is centred about Egyptology. The museum is both a repository of cultural artefacts and an interactive cultural resource.